An Overview: Expert Opinions on Screen Time for Children 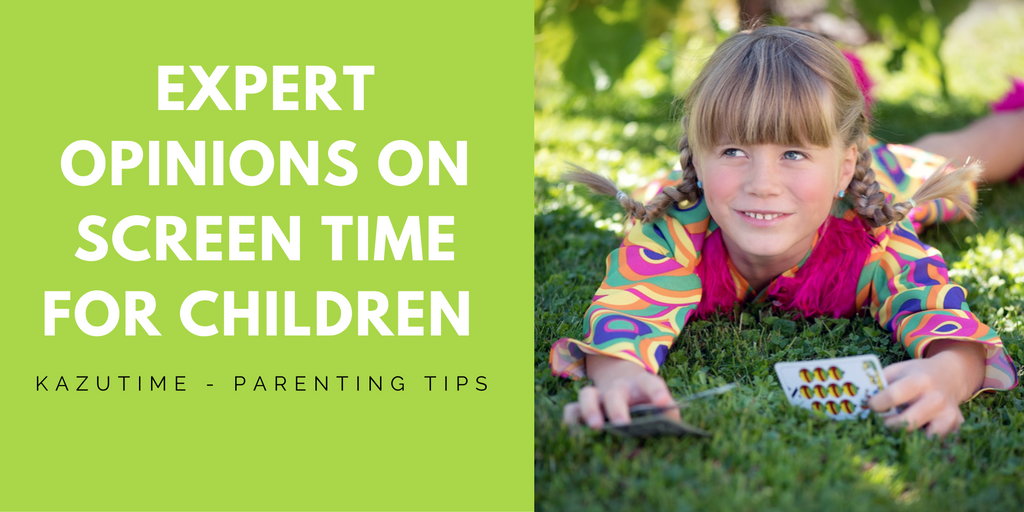 How much screen time should children be allowed? This is the question that experts and parents have been debating for years.

Just a few weeks ago The American Academy of Pediatrics updated it’s guidelines for young kids. The AAP now suggests children can have screen time starting at 18 months instead of 2 years, but until age 5, screen time that is purely “entertaining” should be limited to an hour a day instead of 2. Video chatting, however, is allowed starting at birth because studies suggest FaceTime and Skype with distant relatives can benefit children.

Among the most emphasized points in the new guidelines is the recommendation for parents to view all media with children, if possible. Developmental behavioral pediatrician Jenny Radesky, M.D., who authored the policy statement for children under age 5 said in an interview with Parent’s Magazine, “Young children learn considerably better if a parent is helping them. That’s how they transfer knowledge from 2-D to 3-D and apply it to their understanding of the world. This is crucial especially for toddlers.”

The AAP acknowledges that their guidelines are recommendations and are meant to be flexible. Parents can choose to follow or not based on what works for their family. Historically AAP statements have recommended against exposing children to screen media as they relied on older studies on how much time kids spend watching TV, according to a Slate article, “The Beginning of the End of the Screen Time Wars.” More recently however, a growing number of studies are suggesting that even young children benefit from using media when it catalyzes conversation and is designed for learning.

Marjorie Hogan, a pediatrician at Hennepin County Medical Center in Minneapolis and a spokeswoman for AAP in an interview with nprEd said, “If used appropriately, [digital media] is wonderful. We don’t want to demonize media, because it’s going to be a part of everybody’s lives increasingly, and we have to teach children how to make good choices around it, how to limit it and how to make sure it’s not going to take the place of all the other good stuff out there. Families should encourage a ‘healthy media diet’ for their children. Parents and kids should work together to decide how much time to spend with media every day, and to make sure good choices are being made about what media to take in.”

Rosie Flewitt who studies Early Years and Primary Education at the Institute of Education in London, spoke to New Scientist about some of the positive effects screen media can have on children. She said, “There is an unquestionable body of research showing that new technologies can engage children,” and notes the way touchscreens particularly motivate children to learn. Her own studies have shown that Children who struggle to learn using books often made more progress with iPads. A National Literacy Trust survey gathered similar results. The survey backed up the idea that tablets can promote learning. All the children enjoyed reading more when they look at stories using books and a touchscreen compared to just books.

Some experts argue that the real danger in allowing children unlimited access to screen media is the effect such exposure can have on social development. Patricia Greenfield, a distinguished professor of psychology at UCLA and senior author of a study published in the journal Computers in Human Behavior also spoke with nprEd and said, “We really need to be sure that children, and probably older people, are getting enough face-to-face interaction to be competent social beings. Our species evolved in an environment where there was only face-to face-interaction. Since we were adapted to that environment, it’s likely that our skills depend on that environment. If we reduce face-to-face interaction drastically, it’s not surprising that the social skills would also get reduced.”

For other experts like Dr. Aric Sigman, excessive screen media consumption causes medical concerns for children. On British TV he discussed how electronic devices such as tablets and smartphones can disrupt children’s sleep. He says the “Blue Light” that these tech products emit is to blame. A study by the Journal of the American College of Cardiology found that “recreational sitting, as reflected by television/screen viewing time, is related to raised mortality and cardiovascular disease risk regardless of physical activity participation.”

For more information on how to utilize screentime in an effective way, please contact us.